In 1925, Ernest Kouwen-Hoven erected the first building on what is now the Florida Preparatory Academy campus. It was a magnificent Spanish Mediterranean-style mansion, complete with an authentic Art Deco interior. 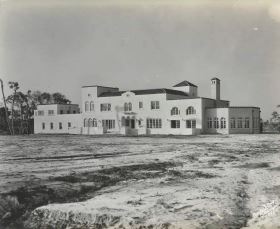 He used the mansion as his home for only one year before selling it in 1926 to A.S. Widrig, who added extra rooms to it and renamed the property "The Lincoln Hotel." In 1957, The Lincoln Hotel was sold to August J. Rimer, the original owner of the Green Bay Packers. He renamed the hotel "The Belcelona."

In the fall of 2005, the Academy began accepting female students in both boarding and day capacities, raising the bar academically and socially.

Following the sale of  Florida Prep in 2017 to California-based investment company, Newopen USA,  the academy embarked upon a 5-year investment plan encompassing campus technology, the expansion of the campus footprint and dormitory refurbishment.

A number of new support programs, including SAT and ACT prep were introduced, and a new academic STEAM-focused curriculum, designed to utilize the new campus facilities, was implemented. An active faculty recruitment drive continues to yield top-class talent from within the USA and beyond. Academics, leadership, character, and preparing students for college and a global business environment continues to be our primary focus.

Florida Prep is now located in one of the fastest growing technological communities in the United States, the 'Space Coast Corridor', a far cry from the sleepy small town the Dwights came upon in 1961.

They would no doubt be proud to note how their school has evolved to meet the growing needs of the area, and also the new student body, one firmly established in the 21st Century with a desire to embrace technology, and to touch the global marketplace in which they live.